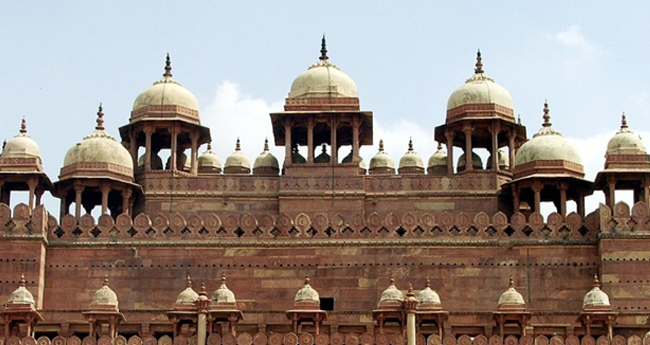 The Mughal Empire - or Mogul - was founded in India by Babur, a descendant of Tamerlane in 1526, when he defeated Ibrahim Lodi, the last sultan of Delhi at the battle of Panipat.

The name 'Mogul' is derived from the name of the area of "?"?origin of the Timurids, the Central Asian steppes once conquered by Genghis Khan and later known as the 'Moghulistan': "Land of Mongols". Although early Mughals spoke the language have tchaghataï and maintained Turco-Mongol customs, they had essentially been 'persanisés'. So they introduced the Persian literature and culture in India, laying the foundations of Indo-Persian culture.

The Mughal empire marks the climax of the Muslim expansion in India. Largely conquered by Sher Shah Suri and lost again during the reign of Humayun, it grows significantly under Akbar, and its growth continues until the end of the reign of Aurangzeb. After the latter's death in 1707, the empire began a slow, steady decline, while maintaining a certain power for another 150 years. In 1739, he was defeated by an army from Persia led by Nadir Shah. In 1756, an army led by Ahmad Shah looted Delhi again. After the Indian Mutiny (1857-1858), the British liquidate the last Mughal Emperor - remained, until that date, as the sovereign of India.